The amazing photograph of young Birmingham resident Saffiyah Khan facing down racists in her city last weekend appeared in the UK press at the same time the Brixton-based Black Cultural Archives was preparing for a special tribute to Trinidad-born social activist, Darcus Howe, who died on April 1.
There are emotional chords struck by the young lady’s defiance and Howe’s tenacity that are not easily recognisable, but they exist and resonate in similar ways.
In the Birmingham picture, shot by Press Association photographer Joe Giddens, Khan is standing sideways in a denim jacket with her right hand in her pocket and bearing an ironic smile. She is a bit taller than the guy in the black cap and “English Defence League” t-shirt who is right up to her face with a threatening scowl. But she stands there, looking slightly downward … smiling. Her hair pulled back in a disorderly “bun” and eyes locked onto his. 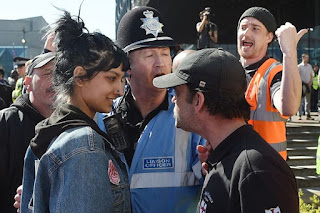 Between them is a seemingly less than hassled police officer wearing a pale blue “Liaison Officer” workers’ vest, his attention on someone else out of the picture. It might have been someone joining in hurling insults at the young lady who had intervened when she thought that the police had not responded promptly to possible violence against a hijab-wearing counter-protester.
The pictorial metaphor for staring down the year 2017, and all this period has brought us politically, appears to have emerged from an unlikely source – a young female, punk rock loving, brown “Brummie” with a nose ring; staring unflinchingly at an agitated demonstrator with a racist message.
It was the stare of rebellion, different in objective context but not dissimilar in essence to Howe’s eloquently framed 2011 injunction to a BBC presenter to “have some respect for an old West Indian negro.” Through a television monitor, Howe was staring down a bigotry for which the otherwise respected broadcaster eventually apologised.
Young Khan is, of course, no Howe. The presumed invincibility of youth is nothing like rebellion fashioned on the fiery anvil of painful experience, but the light in their eyes appears the same. Do not dare touch me, they seem to say. Have respect.
We are as people from this part of the world, in 2017, staring down the barrel of these new times, yet to find our voices, much less the steely gaze of defiance we once knew.
Let’s add another name to the mix. There, would have been no mobile phone paparazzi to capture the moment, no roving Instagram or Facebook Live dispatches to report the look on her face in 1937 when the police came for Elma Francois – sedition being the charge. But we can imagine the clash of eyes when they came for her.
It took 50 years to secure her rehabilitation and it’s now 30 years hence, but look at her eyes in the old photo retouched for Rhoda Reddock’s biography on the late activist. We can imagine them, as she stood at the witness stand in her sedition trial, like young Khan’s upon the EDL-inflamed eyes, only this time upon a tribunal in a life and death case. “I don’t know that my speeches create disaffection, I know that my speeches create a fire in the minds of the people so as to change the conditions which now exist,” Francois said in her defence.
Today, “they have not rioted yet” and the mutinous refrain is garbled, disunited and cacophonous. Eyes blunted by the lights and cameras and set upon the House of Representatives and, through it, a slowly disappearing treasure trove.
Through the eyes of Khan and Howe and Francois – different people in different places at different times – we can set the angle and intensity of the staring down of 2017 and all it has brought. For, what currently prevails is not encouraging.
We are shrinking away from the true challenges. Our situation is not as much about what others have done to us, as what we have done to ourselves.
Violence and murderous crime are not the function of criminal deportees or undocumented immigrants. These seeds were sown right here in our backyards. My friend and colleague, development expert Steve Maximay, describes the phenomenon as “internal deportation”, but that’s another story.
Caricom-exit existed long before Brexit and we have been speaking about and attempting to install a figurative immigration wall based on racist and discriminatory stereotypes long before November 2016. Look and see who are the “expats” and who are the “immigrants” among us, as a start.
Our eyes have surveyed everywhere except straight ahead and through the souls of the things that have confronted us.

I have been looking at that Birmingham photograph again and again in recent days and was able to view the Howe photos at the Black Cultural Archives in Brixton last weekend. Then there is Ms Francois’ picture. Something about the eyes.

*First published in the Trinidad and Tobago Guardian on April 13, 2017