DROWNING OUT THE LOOMING STORM

Journalists, writers and activists in the Caribbean confront a creeping but determined wave of silence as the tide of social and economic instability and decline advances. New-born, almost still-born nations have walked before they have learned to creep in the stark absence of ancient cultural habits that often, though not always, strengthen democratic instincts and systems.

Mexican journalist and writer, Lydia Cacho, was raped in 1999 in an attempt to intimidate her out of writing about the exploitation of women and children in Mexico. She was later arrested and charged following her fictional treatise on the sexual exploitation of children entitled ‘Demons of Eden’. 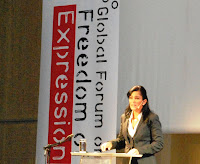 She now tours the region and the world speaking out on the need for journalists and writers everywhere to hold their ground. Addressing the Global Forum on Freedom of Expression in Oslo on June 3, Cacho recognized that among the obstacles to achieving the ideal of unfettered journalism was unenlightened media ownership and management.

Thoughts then ran to my home in Trinidad and how Newsday had conspired with our cultural predisposition to shut out a voice with which we often disagreed – that of Kevin Baldeosingh. They came for the columnists, I thought, and no one spoke out because it was not they who had been silenced.

As German theologian, Martin Niemoller, who faced imprisonment and the threat of execution during the Nazi regime, declared for eternity: we remained silent on the crimes until it was our time “and there was no one else to speak out for me.”

The Global Forum brought together a diverse and sometimes unlikely variety of people, all prepared to speak out on each other’s and our behalf.

Malalai Joya (once known as “the bravest woman in Afghanistan”) is currently in exile, often in hiding in accommodating countries that are not her own, because she spoke out on behalf of the people of her country as an elected member of parliament. It would have been easy to have been misled by her slight frame and gentle manner, had she not opened the Forum with a stinging assault on countries that preach democracy and openness but who remain silent in the face of massive, murderous treachery and pain.

Ethiopian journalist, Serkalem Fasil, who was apparently denied a European visa and could not attend the Forum, sent a note describing her ordeal as a pregnant prisoner denied proper health care and attention while serving a prison sentence in 2005 for publishing articles critical of her government. She, too, spoke of the international condemnation that followed and how those who spoke out on her behalf, however far away, saved her and her prison baby.

Then there was freed Guantanamo prisoner, al Jazeera journalist, Sami el Haj of Qatar who turned to poetry behind the barbed-wire fences and who now heads the Human Rights Desk of the international news network – a job he holds so he can bring attention to human rights abuses around the world. He spent six years in prison without ever being charged for any crime.

So many of these people could have gone back home and changed jobs and perhaps turned the other way.

Like poet and academic, Jack Mapanje, of Malawi who still isn’t sure why he was sent to jail without charge and without sentencing for three and a half years. Today, he lectures in the United Kingdom on the literature produced by prisoners and speaks out on injustice everywhere.

It took Oslo to remind me of the importance of keeping the struggle going in order to halt the rising tide of silence. I thought of the panic attack of censors in Jamaica, the broadcast legislation in the OECS, the broadcasting code of Trinidad and Tobago and the “exiles” of Caribbean media who now use their blogs and websites to speak freely when newspapers and journals shut them out.

It is true, no one has been shot or detained or killed. But the backlash has been swift and the intention has been to silence. There are those in exile who have gone nowhere. Their souls remain hidden in computer hard-drives and copybook pages and sometimes nowhere else but in their hearts and minds.

It is a lie that our calypso and reggae and dancehall and rum-shop candour express our freedom. They simply drown out the looming storm that awaits us all.
at June 04, 2009 3 comments: