Even More Stupidity in the T&T Parliament

Parliament is not a favourite news location for many Trinidad and Tobago journalists. Hours and hours of talk and talk and talk need to be translated into less garbled language. Parliamentarians phone and write editors complaining about absent concepts, ideas and sound bites. The Press Gallery is small and cramped. The narrow staircase leading to the Press Gallery has claimed several journalistic ankles and the absence of nearby telephones and a proper working press area has tempted reporters to break the rule regarding the use of mobile phones in the parliament chamber.

Some years ago, the United National Congress dominated parliament, under the late House Speaker Hector McLean, banned the use of recording equipment by the print media. Some of us tried to lead an argument against this unenlightened, idiotic instruction and resorted to ignoring it with impunity later on. I think, over time, parliamentary officials have resigned themselves to the fact that a foolish rule is a foolish rule and almost everyone now uses electronic recording devices in the chamber without much of a fuss. So I hope, at least.

I have been off the parliament beat for years now. My last assignments in parliament were in the late 90s when I freelanced in parliament mainly for the Trinidad Guardian and, a little later, covered a few assignments for one or two radio stations.

But a large part of my journalistic heart resides in that old parliament facility in the Red House. I was among the journalists caught in the cross-fire of July 27, 1990 when a mur 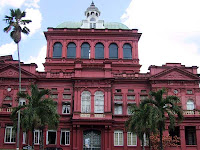 derous band of hooligans attempted to take over the country (and held parliamentarians, journalists and a few innocent bystanders hostage for five days both in parliament and at the state television station).

Fortunately, I was able to escape to safety, leaving behind an old Marantz recorder owned by my then employers, NBS Radio 610.

Since then, I have kept tabs on parliament and its goings-on. I have observed opposition MPs suddenly become government front-benchers. I have seen some folks become comfortable in jackets and ties. I have observed changes in speaking style. How some MPs have matured. How others have regressed. How some remain hopeless as representatives of people at the highest level.

Now comes the latest round of idiocy in the form of a regulation on the use of laptop computers in the parliament chamber. The new rule dictates that only two persons at a time are permitted to have their laptops open – the person on his or her legs and the person next in line to speak.

This absurd and contentious ruling stems from last year’s suspension of Opposition Leader, Basdeo Panday, for contemptuous and disrespectful behaviour against the Speaker of the House, Barendra Sinanan. This was the culmination of an exchange over Panday’s use of a laptop during parliamentary proceedings. The suspension, it is my understanding, was not because of the laptop use but because of Panday’s outburst in response to the Speaker’s instructions about the use of his laptop. But that is another story I am not prepared to deal with.

The Speaker was later quoted as saying in response to questions about the laptop rule: “What would prevent 41 members from using laptops during the sitting? One doesn’t know if they are looking at pornography or chatting on-line.”

Has anyone, reading this blog, heard more rubbish in their lives?

Maybe, they are afraid that members will be busy having cyber-sex on MSN Live or Yahoo Messenger while the Prime Minister is pronouncing on serious matters.

The fact that other parliaments around the world, including, (at one time) the US House and the Australian parliament, have had similar restrictions are no reason why we should follow suit on the grounds declared by the Speaker.

On the question of the possibly disruptive nature of laptops and other devices in parliament, Lundy wrote: “The possibility that online services would cause disruption and diversion was a factor in the US Congress’ decision to prohibit the use of such services on the floor. It was argued that it would be `discourteous' to a politician making a speech if other members were glued to their computer monitors, answering emails or researching legislation.

“According to the US Subcommittee on Rules and Organization of the House (21 November 1997), ‘If electronic devices are permitted in the chamber, lawmakers may be so engrossed in their “electronic office” that they are unlikely either to be “hearing” or “studying” the viewpoints of their colleagues.’

“On the other hand, there is nothing to prevent similar ‘distractions’ of members and senators conducting their own work while in the chamber. Noise is not a valid argument for banning computers from parliament.

“Anyone familiar with the level of ‘activity’ in either the House of Representatives or the Senate would be hard-pressed to argue that either computers or electronic voting devices would disrupt proceedings any more than is the current situation. In some respects, electronic technology might result in a ‘quietening down’ of parliament, as members would be able to work during normally inactive periods.”

I second the motion.

In fact, a little cyber-sex on the side might work well to lower the political temperature on the Floor and present us with more smiling faces in the House of Representatives and the Senate.

How long again before we have a real parliament?
at January 07, 2009 No comments: