Negotiating Marlon James’ A Brief History of Seven Killings is like exploring an unlit crack house at night shirtless and barefoot. At any minute, something can jump out at you or you can witness anything from raunchy, illicit pleasure to murder or you might simply step in fresh or old human faeces.

The 704-page epic Jamaican tale is no easy read and, most certainly, was no easy write. In the end, James has a Man Booker Prize for Literature to show for his pains and Jamaica a challenging, discomfiting new icon of high literary accomplishment.

Set in both onshore and offshore Jamaica – aka New York and Miami - the Jamdown dialogue has the potential to challenge the uninitiated. There is nothing affected or pretentious – no tourist rendition to earn the comprehension of newcomers.

Violence is heaped upon violence and the sex is sprinkled like sweet and sour escovitch on naked fish bones to the sound of Bob Marley and the Wailers. Hard to imagine in homophobic Jamaica the “battyman” gangster whose open secret festers and festers and is soaked in the blood of the murders that open and close the book.

There is nothing to comfort those who see in Jamaica and its politics the perverse romance of a socialist experiment gone wrong, a tourist paradise or the glamour of a musical superstar worshipped far and wide. The story of “The Singer’s” attempted murder in 1976, the famous 1978 Peace Rally that saw a joining of hands on stage and of criminal minds off-stage and the inter-connectedness of political warfare, drug trafficking and gang murder are on display in gory detail. 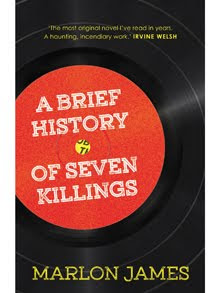 The more knowledgeable quickly recognise the voices of Marley, Manley and Seaga and the charred corpse of notorious gang leader, Jim “Don Dadda” Brown (Josey Wales, to James), who epitomised the corrupting influence of murderous drug money prior to his mysterious death by fire in a Jamaican prison in 1992 while awaiting extradition to the United States for drug racketeering and murder.

The veils are thin and the storylines faithful to the original plots designed to maintain political control and, through it, criminal turf. Or, as James challenges the reader, the other way around. In the process, Cold War tensions arise, inviting “the Cubans” and their bombs, covert CIA intrusion and the dishing out of guns to beat back the communist threat.

Most of the main characters epitomise the “rude boy” culture and much of the more memorable dialogue flows at the rate of the dub poet full of sustained fury.

“Madness,” says gang member, Bam-Bam “is walking up a good street downtown and seeing a woman dress up in the latest fashion and wanting to go straight up to her and grab her bag, knowing that it’s not the bag or money that we want so much, but the scream …”

In New York, a conflicted senior gang enforcer for the Storm Posse finds relative peace and confronts his sexuality and his fate. “Think like a movie. This part you put on your clothes, boy wake up (but boy would be a girl) and one of you say babe, I gotta go.”

Then there is the woman in love and awaiting a plane ticket to the States from her white American lover. Once there, she imagines, she can build a better future. But he is going back to his wife. She stays back in Montego Bay. From her, the lines: “Two years since the election. Jamaica never gets worse or better, it just finds new ways to stay the same. You can’t change the country, but maybe you can change yourself.”

James undoubtedly deserves his place at the front of the line; A Brief History of Seven Killings its place at the top of the region’s literary accomplishments. The years have passed and so have elections. In what ways, the author challenges us through a hapless lover, have things really changed?

First published, in part, in the Trinidad and Tobago Guardian - January 14, 2016