Is Press Freedom Under Threat in Trinidad & Tobago?

There has not been a period in our history that the free press has not been threatened or under attack. This has to do with our essentially authoritarian culture – a predisposition we find not only in the rulers, but in the ruled. I cannot say with confidence that we are all opposed to the notion of censorship. I cannot say that people, in general, are in agreement with the view that a free, unfettered press is good and not bad for our society.

Were we to possess such an orientation, we would have been greater inclined to attend to matters of the media in a much different way – by considering the value of information as a social good, by believing that the potential impacts of media content are best measured using science and not guess-work, by knowing that better societies are built upon the foundation of diverse views, analyses, perspectives and truths.

What we have before us today in through the voices of the political leadership has been heard before. It is the assertion of authoritarian control. It is the result of the view that opinions, information and analysis are the exclusive preserve of those who govern. It is the conscious undermining of a belief in freedom as the basic condition under which citizens assert their places in society.

If people understood what freedom of the press and freedom of expression mean to us as a developing country, we won’t have to engage this constant struggle to assert rights we should have long taken for granted.
at November 29, 2012 No comments:

Impunity and Free Expression in the Caribbean

Efforts to encourage journalists and others to observe the Day to End Impunity in 2011 were spectacularly unsuccessful. This owes much to the fact that the word “impunity” is not one that resonates very clearly in the public domain in this part of the world.

This is not because freedom of expression and other freedoms are not successfully curtailed without any recognisable consequence for perpetrators, but that our authoritarian culture, derived from a repressive colonial past and dysfunctional political culture, does not readily predispose many of us to easy recognition of acts of impunity.

For example, when a newspaper editor is threatened and defamed via a concerted email and online campaign in , there aren’t high expectations that the person suspected of being behind it will ever be brought to justice. It is written off as a joke.

Likewise, concerted efforts to smear the characters of two female investigate journalists in the same country are dismissed as intolerance by the media for the views of anyone but their own. 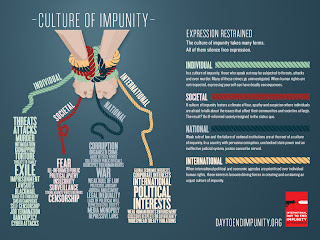 This year, the campaign to end impunity will focus on the plight of Guyanese newspaper columnist, Freddie Kissoon, who has been physically attacked on more than one occasion, including instances in which he has been punched and had faeces thrown on him. There is hardly a body of public opinion signally outraged that despite very good clues, no one has ever been brought to justice for these crimes.

Recognising that freedom of expression does not only include the write to express oneself, but the right of others to seek and access such expression, an act of impunity can also said to have prevailed when the state broadcaster in Guyana deprived persons from one part of that country from accessing its radio and television signals because of contentious budget cuts owing much to the interventions of the political representatives of that region of the country.

Acts of impunity may also occur when labour laws, the right to associate and the right to assemble are breached. For example, there was the recent case of a senior journalist in who was dismissed by his Barbadian publisher on highly-contestable grounds related to a story he refused to retract and which was later found to accurate. The conditions of his dismissal appeared clearly to conflict with existing industrial relations norms and there is the view that a level of passive complicity has been displayed by the government of as a response to what some contend is an act of injustice.

Many in the international free expression community sometimes also have to be convinced that someone need not be killed, kidnapped, tortured or jailed in order to be silenced. Silence can come from the loss of a newspaper job, the fear of public castigation or shame when the threat of embarrassing personal information looms and the manipulation of otherwise valid regulatory conditions related to the operations of broadcasters.

A culture of impunity can be said to be in existence, according to the International Freedom of Expression Exchange (IFEX) “when those who seek to control the freedom of expression of others do so knowing that it is unlikely they will be held accountable for their actions.”

The impact of such a culture of impunity can be recognised in the environment without searching very far. Despite our claims of public candour and overflowing creative expression, there are taboo issues many would not touch, many of which challenge existing political orders.

is not representative of the rest of the in this, but the unresolved murders of Jean Dominique, Brignol Lindor, Jean-Rémy Badio, Robenson Laraque and Ricardo Ortega send a very ominous signal. In , broadcaster/political activist, Ronald Waddell was killed six and a half years ago with neither a prosecution nor conviction forthcoming.

IFEX warns us that all of this can lead to a world in which people are afraid to speak out. Where criticism is stifled. Where the hard questions don’t get asked. Where the powerful don’t get challenged. The result is a world where free expression is silenced.

This is the scope and scale of the challenge for us in the .
at November 02, 2012 No comments: