Where is there a Daily Mail in the Caribbean?

My cousin, Marcus Sheldon Gibbings, was stabbed to death in an apartment in on October 26, 2006. The subsequent police investigation – if we were to be charitable enough to describe it as that – remains unsuccessful.
The murder was 16 years after the racist killing of 18 year old, Stephen Lawrence in Eltham in south-east .
Two murders under two completely different circumstances. Marcus was 32 - a Trinidadian living and working in . was a student and the son of immigrant parents in the .
What united the two were that police investigations into the circumstances surrounding their murder were affected by the fact that officialdom viewed them essentially as socially-marginal individuals – Stephen, a young black male and Marcus, a Caribbean “foreigner”.
In both cases there were also adequately strong grounds for concluding that criminal cases could have been brought against clearly-identifiable suspects but nothing happened. Overwhelming circumstantial evidence pointed in singular directions in both instances.
There was also the added pressure of concerned parents. In Stephen’s case his parents tirelessly devoted their energies in lobbying for criminal charges to be brought against to persons which strong evidence pointed. In Marcus’s case, his father Richard has tried from a distance to keep the case “warm”.
The Bermuda Gazette in has tried in its own way to also keep the story of Marcus’s murder alive. In the UK, the Daily Mail went much, much further, in 1997 publishing an amazing front-page story which identified five “murderers” – daring them to sue if the newspaper was mistaken or wrong. 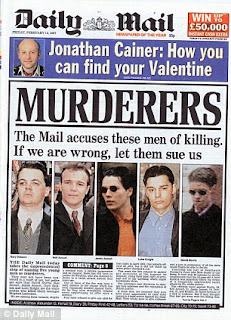 On January 4, 2012 the court sentenced two men, Gary Dobson and David Norris, to 14 and 15 years in prison respectively.
In January 2012, Marcus’s killer remains at large. A free person. Is there a Daily Mail to do the unthinkable? Is there a sufficiently independent and intact legal and judicial system to enable such boldness?
Is the quality of intervention of a Daily Mail conceivable anywhere in the English-speaking ? Or do judges, politicians, the police and many regular citizens consider the press to be necessary though bothersome evils?
Just asking.
at January 08, 2012 3 comments:

The Threat of Media Capture in the Caribbean

(Presented at the World Press Freedom Day Virtual Dialogue hosted by UNESCO, Caribbean on May 4, 2020) Background Depending on w...