The view of Port au Prince at dusk from the barricaded premises of Le Chateau Phoenix in hilly Pétion-Ville offers dust and haze. Here is where formerly exiled Haitian dictator Jean-Claude Duvalier would have, in January, fixed his first extended gaze at the shattered city he fled 25 years ago.
The view of the mountain from down below, at the foot of the bumpy, pot-holed route is however not as clear as it is captive to the unimaginable filth and disorder of city streets which, 22 months ago, had become an open, steaming morgue.
An irascible American-born hotelier chain-smokes through his greetings and offers a room that quite possibly served as temporary home to the returning political heir who led the country for 15 years following the death of his father, “Papa Doc” François Duvalier, in 1971.
Today, “Baby Doc” prefers to keep a low profile. Several leading Haitians, including a former spokesperson for United Nations Secretary-General, Ban Ki-moon have filed charges of corruption, kidnapping and torture against Duvalier. Michele Montas is one. She is a journalist who served under Ban until shortly before the 2010 earthquake. Montas is also the wife of slain Haitian broadcaster, Jean Dominique, whose April 2000 assassination remains curiously unpunished.
From Pétion-Ville you see the sun set over a colourless cityscape. Over the short wall near the swimming pool, the shock of green to the left frames other well-endowed structures that line the narrow, bumpy route to the peak. Along the street you only know these buildings are there because large, sheeted metal gates painted rusty red, and sometimes green, announce a different presence. But from the hills, they jut out almost guiltily through the green.
Down the hill, the road is narrow and dusty and dry. There are people everywhere; baskets, bicycles, chickens, children in tow. Young, beautiful women, their hair brilliant and orderly, are selling used clothing, food, bandages and hairstyles. Men sell mobile phone credits, tyres, cigarettes and water. Children run precariously between the lawless motorbike taxis and reckless, colourful buses packed to the brim with arms and legs and market animals. A proud student holds on with one hand, his uniform clean and starched – college tie like a proud flag behind him as the bus speeds by.
An overflowing stream rushes down a narrow lane onto the main road and the ladies take their shoes off and shuffle to higher ground. “Politics,” says the driver as the water takes litter downstream to other streets. 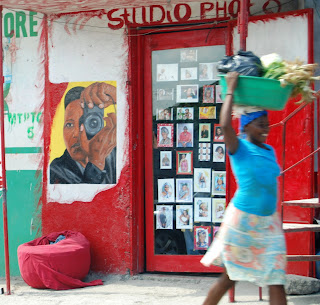 There are mounds of 22-month old rubble and 10-second old trash on almost every street. Local wags wonder why the United Nations’ blue helmet troops don’t trade their guns for shovels and brooms. Why the plane-loads of evangelists don’t spend less time saving souls and more time saving lives by clearing the mess and perhaps previewing the heaven they know so much about. Port au Prince, all agree, is a public health nightmare actualised but neglected.
It is a four-hour, carefully-executed drive to Les Cayes. On the way, there are more tent cities near Leogane located at the epicenter of the 2010 quake. There are portions of the road that will tear your under-carriage to bits if you do not notice the sharp drops and deep fissures on an otherwise decent highway through south-western towns.
When darkness falls, the flambeaux come out as people walk and talk and eat and preach and contemplate the future. Oncoming lights are deceiving – one light might be an oncoming motorbike taxi, a converted flat-tray truck/bus or a heavy duty construction vehicle with a sleepy driver and defective head-lights.
Nobody knows the speed limits and nobody cares and a polite police roadblock is a check for documents; not lights or brakes or passenger restrictions. The Highway Code is the law of necessity. There are two road accidents on the way to Les Cayes. A motorbike rider is writing in pain on the road and is comforted by a crowd. A truck has run into a ditch and men with instant bags run toward the cargo.
Then comes the seaport city of . It is said that Simon Bolivar came here to recruit freedom fighters for his South American incursions. It is bustling with street vendors and sweltering midday cafes with fish and conch and fried goat with plantains and rice. At night, the flambeaux come out and the hum and laughter of life are alight.
Here, a Canadian volunteer veterinarian says his work to immunise animals is a virtual con-job by a clandestine Christian charity to win souls. “I did not know what I was in for, until I came and I was taken to this church …” he mutters over breakfast. In the hotel car park, there are vehicles from the International Committee of the Red Cross and the International Organisation for Migration and a white van that has come to pick him up to deliver rabies vaccines to horses and mules and donkeys.
Head due south-west and back along the coast headed north, you reach Port Salut where you will also find Pointe Sable – two kilometers of calm, blue water and white sand beach. There are no crowds this time of year … yet. The craft and food vendors take what business they can get. Straw hats and place-mats and wooden figures of kissing couples and women on donkeys. On the menu there is goat and fish and beef and pork and conch. It’s half the hotel price and comes with mild pepper sauce.
About an hour and a half from Les Cayes in the other direction, you can get to the cloud-crowned region of Salagnac that reaches an elevation of close to 1,000 metres. A red, treacherously unpaved bauxite-laden road leads to pine cone trees, a constant mist, a quaint mountain school, an agricultural research station and yam and carrot plantations. 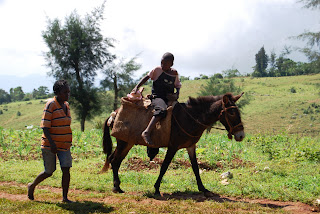 Salagnac is where the contrasting pictures of are best recognised. The stuffy, sickening streets of Port au Prince, pretentious glory of Pétion-Ville, the gloom of the tents and “politics” of flooded streets are nowhere near the pristine foliage and gentle smiles of farmers’ children.
Tomorrow comes the drive back to Port au Prince, the hotel overlooking the haze, the constant hum and motion of people, blue helmets with big guns hustling to and fro, a chaotic airport where men with badges offer to help you jump the queue for a tip, endless employment-generating security checks and a flight among returning preachers counting souls.
at November 10, 2011 No comments: