New social media in the form of blogs, Facebook, Twitter, YouTube and others are unfolding as important primary sources of news and information on life in .
They have played a vital role in unveiling important information on a number of recent, high-impact news stories. These have included issues such as the Reshmi Ramnarine assignment and developments linked to the work of the Tourism Development Company (TDC).
International media development experts are beginning to agree that while social media have been able to identify the “dots” on the social and political landscape, traditional, mainstream media are best placed to join those dots.
A discussion convened by the Washington-based Center for International Media Assistance (CIMA) and the Global Forum for Media Development (GFMD) last week explored the issue.
The context of the discussion was the pervasive and effective use of social media during what James Deane of the BBC World Service Trust, described as “democratic outbursts” in North Africa and the . 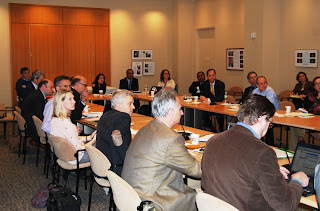 Most speakers suggested that the “new” media can be used appropriately as content in mainstream media but that more needed to be done to establish the bona fides of the new platforms.
Luis Botello of the for Journalists (ICFJ) for example said the challenge of social media usage resided in being able to sift through a growing mass of citizen-generated content.
His said his own organisation, which promotes journalistic development and press freedom globally, continued to ask hard questions about “who gets to be trained” in order to promote greater credible use of social media as a source of news and information.
Deane suggested it might well be a case where the benchmarks of performance by the bloggers and other social media users would be the extent to which there is “self discipline” and a “commitment to peace” on their part.
He said it was clear “we will need to go beyond what we have seen in the ” since both repressive governments and organised criminal networks are equally capable of using the new media to their advantage as propaganda tools.
Veet Vivarta, Executive Secretary of the Brazilian News Agency for Children's Rights (ANDI), argued that whatever the new media brought to the table, “old style journalism” was still “a very important tool” in telling the stories of societies.
He pointed to the reliance of the “old tools” on values including accountability and transparency.
The debate is however tempered by the realisation that Deane’s “democratic outbursts” are essentially the product of social movements with tentacles that extend way beyond the reach of the new media.
It was a point stressed by A.S. Panneerselvan of Panos South Asia and who said it was the “power of ” in that brought the Mubarak regime to its knees and not the influence of the new media. He said a lot of time was being spent on looking at something that was simply the expression of a much deeper-seated process taking place throughout the globe.
Gabriel Baglo of the International Federation of Journalists (IFJ) operations in said, for example, that “what is happening in North Africa today is what happened 20 years ago in the rest of .”
He said it was important that the momentum of the movements in North Africa and the expand since there was a recognisable “democratic recession” throughout the African continent. A similar comment was made about democratic “roll backs” in some parts of Europe including countries such as .
There was general agreement that the facilitative role of the social media was becoming increasingly difficult to reverse since, in most instances, digital media are an integral part of the digital economy.
This made it difficult for repressive governments to tinker with free expression in the new media without hampering the greater use of online technology in the development process.
The general conclusion was that the social media are not only here to stay, but will continue to be an important source of potentially revolutionary change, reinforced and validated by old fashioned newspapers, television screens and radios.


* Originally published in the (Trinidad) Sunday Guardian - http://www.guardian.co.tt/news/2011/03/20/social-media-takes-place-alongside-old-media
at March 20, 2011 No comments: