Growing up and confronting anew the challenges of our lives we generally meet two primary groups of influential people – those who guide our behaviour and the things we do, and those who provide us with the perspectives and wisdom we require to interpret the world around us.

The latter are not often readily recognised in the absence of focused contemplation. For example, the influence of my late grandfather, Samuel Gibbings, was not really fully appreciated until many years after his death when I started paying attention to the principle of “fairness” required of the proper practice of journalism. It was then I recalled his many, usually unscheduled, lectures from the head-master’s stage at in .

My father, Arthur ‘Cips’ Gibbings, brought clear, uncluttered perspectives on human behaviour and how well-developed inter-personal skills contribute toward the shaping of the bigger social picture.

Then came the teenage years and Lloyd Best – one of the leading economists and thinkers of our time. I am used to saying that my father and Lloyd Best contributed more than half of what I know and understand about the world. The other half came in smaller but not insignificant doses. Some people account for more than a small slice of wisdom and understanding. Dennis Pantin was one of them. On Tuesday July 13, 2010, Dennis left us almost as suddenly as the news that he had been diagnosed earlier this year with intestinal cancer. 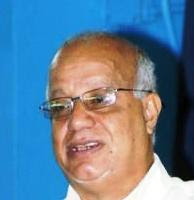 Dennis was not only the brother of renowned journalist, Raoul Pantin, but was himself once a radio reporter and, latterly, an author and newspaper columnist on economic and political affairs. But many will remember him as Professor of Economics at the University of the and founding Coordinator of the Sustainable Economic Development Unit (SEDU) of the UWI. From there, Dennis brought the perspective of sustainable development to the public policy debate particularly from the standpoint of economic development.

As a young reporter, I often consulted with Dennis (in lieu of similar consultations with an increasingly irascible and impatient but magnificent Lloyd Best) on economic issues I felt I did not have a proper grasp of. He, together with the deceased Frank Rampersad and Frank Barsotti and (very much alive) people such as Anthony Gonzales and Karl Theodore were among the most generous contributors to my development as a journalist who had an interest in economics and finance.

Dennis was also special because he was always plain-talking, well researched and always ready with anecdotal support for his many views on so many issues. Like me, he too dabbled in the politics of the Tapia House Movement of the 1970s and 1980s. In 1976, he was the Diego Martin East candidate for Tapia. In 1981, I ran in Arouca. I think these backgrounds also helped strengthen a longstanding professional relationship that often ventured freely into discussions on politics, politicians and leading public personalities and events.

As his time approached earlier this year, I believe he must have experienced the creative tension that existed between the need to speak frankly and openly about the reality and the urge to explore, through his column, the memories he had accumulated throughout a rich and abundant life.

On February 28, 2010 – not long after initially learning of his illness – Dennis wrote the following column in the Trinidad Guardian:

Reflections of a February 26, 1970 Cub Reporter

On the morning of February 26, 1970 (40 years ago last Friday) I was given my first “outside” assignment as a cub reporter at 610 Radio to cover a UWI student demonstration. “Dem university students playing the ass this morning, Pantin. Go out and cover it for us,” were the instructions—or close enough, anyway—from old school, hard-boiled chief News Editor, Jerome Rampersad (deceased). Not that he necessarily meant that literally –although you never knew with “Ram,” as he was affectionately known to all. In fact, his very covering of the story was an indication that he felt it was important. Moreover, as far as I am aware, no other reporter, cub or otherwise, was present at the demonstration’s start. I immediately grabbed my notebook and virtually ran from to South Quay, where the first set of university students and other demonstrators were gathering at the Canadian High Commission offices.

The reason was to protest the Sir George William incident in , where scores of students, including T&T and other West Indians, were arrested. (In last month’s T&T Review, Bukkha Rennie provides an insider view of what happened there and then). There were not that many demonstrators, as I recall, and the march proceeded to , where they got to the steps of the Royal Bank of . Then an incident occurred which, in my opinion, was the trigger for 1970, although it was a blaze simply awaiting a light to ignite, anyway. This occurred when the demonstrators were stopped at the steps and Dave Darbeau (as he was then: Khafra Kambon now) went up to an officer in khaki.

I did not hear the exchange, but the officer then shoved Khafra in his chest, and he fell back unto the other demonstrators, who then ran into the bank and did the absolutely radical thing of discarding savings and other deposit slips on the ground. By then, the temperature had, however, increased, with more police arriving and a curious lunchtime crowd gathering to observe what was happening. Soon, the march moved on to the Roman Catholic Cathedral, where some demonstrators entered and began to place placards on many statues of saints, etc adorning the church, but already in Lenten vestments, as it were. Shortly afterwards, Geddes Granger (Makandal Daaga) arrived, and the atmosphere got even more charged.

However, the march eventually dissipated that afternoon. It was the next day that the real action began, when some of the so-called leaders were arrested overnight and brought to court to face charges. Suddenly, the hundreds of demonstrators had turned into thousands. And the rest, they say, is history (captured in my brother Raoul’s own eyewitness account of 1970: “Black Power Day: a Reporter’s Account of 1970), although I am not sure this history is being taught in our police academies, given the recent treatment of the People’s Democracy march around the Red House.

By the time the Cathedral entry occurred, however, the place began to swarm with more senior journalists, from both print and broadcast media. Later, I was to notice the long, lanky frame of a senior to me in Fatima, Lennox Grant, then an Express reporter, whose particular long-legged stride had been noticeable from those days.

By October of that year, we were both, together with Keith Smith, enrolled as first- year university students. When I did return quickly to 610 to report for the 12 noon newscast, Alfred Aguiton, another Fatima graduate in Raoul’s time, grabbed my story and taught me the most basic rule in journalism: start with the most sensational gripping element, and let every thing else follow. (I had begun with the South Quay start and slowly got to the Cathedral: which, of course, was the central sensational news.)

The 1970 “Revolution” was, to be brutally honest, put down by the forces of reaction, although its own internal contradictions meant that, by itself, it was unlikely to be able to deliver without other support. What remains relevant are two of 1970’s key slogans: “Power to the people’ and “Indians and Africans unite.”

“Power to the people”

As I have argued previously in this column, I think the Constitution Reform Forum has updated and more structurally integrated these two slogans with maxims of its own, the first being: “From maximum leaders to maximum participation.” This breathes life into “power to the people” beyond punching fists in the air in after a speech by, well, a maximum leader. The second is from “Winner takes all to all Take Win,” which accepts that for a long time, racial securities will remain and can be best assuaged by giving people some degree of control over their own communities.

The Threat of Media Capture in the Caribbean

(Presented at the World Press Freedom Day Virtual Dialogue hosted by UNESCO, Caribbean on May 4, 2020) Background Depending on w...