I have lifted this entire entry from the blog produced by Barbados-based writer B.C. Pires (bcraw.com) who cut and paste the entire piece from a column written by novelist/journalist Kevin Baldeosingh but which was not printed by its intended publishers.

These two gentlemen are Trinidadian satirists whose work has, at different times under different circumstances, been clinically excised from the pages of newspapers in Trinidad and Tobago in order that Church and State remain unshaken and at peace. Perhaps B.C. and Kevin are lucky. In some countries, they have you shot or hacked to death in the street or in your car as you park outside your home.

Twenty years ago, the access of local audiences to their work would have been virtually severed. Today, their readership need not disappear at all. 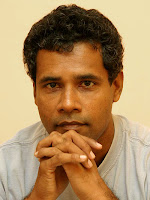 One more confession. I have not asked Kevin whether I can reproduce his column in this space, so read it quickly before this post suddenly disappears.

First, let me apologise to readers for the non-appearance of my column over the past two Fridays. I don’t know if it was technical glitches, but some people might well believe God was punishing me for exposing a plagiarist priest. Of course, anyone who believes that also believes in a God who does not favour truth and transparency. Which brings me to the preamble of our Constitution.

“Whereas the People of Trinidad and Tobago (a) have affirmed that the Nation of Trinidad and Tobago is founded upon principles that acknowledge the supremacy of God,” it begins: which instantly exiles people like me, who acknowledge no such thing. Indeed, this phrase formed no part of the original Independence Constitution but was inserted, as Dr Eric Williams said in an address to Parliament on May 11, 1962, because of the urging by religious organisations that there “should be in some appropriate place a preamble in the Constitution which would include a suitable reference to Almighty God.”

Now mentioning God is one thing, but it escapes me how asserting that all the people of T&T believe in a Supreme Being can constitute a “suitable reference”. After all, even in 1960, over 4,000 persons (or just 0.5 percent of the populace) said they followed no religion or did not state their religion in the national census. The 2000 census has just over one percent of the populace not stating a religion. That’s at least 15,000 persons who are not acknowledged by the Constitution (although a 1993 survey by Patrick Johnstone puts the percentage of non-religious persons in T&T at nine percent, which is over 100,000 persons). So, if some religious fundamentalist claimed that atheists have no rights under the Constitution of Trinidad and Tobago, he would have an arguable case. These rights, remember, include equality before the law, privacy, and freedom of thought. And since all these are transgressed even for believing citizens, it would theoretically  be easy for the State to oppress non-religious persons.

Now, admittedly, this is unlikely to occur in any formal fashion. But the Constitution’s preamble, which is reproduced in the Draft Constitution, goes to the heart of the question of what principles should inform such a foundational document. On the one hand, since the vast majority of citizens would not disagree that they acknowledge the “supremacy of God” (in word, if not always in deed), it can be argued that the Constitution rightly reflects the prevailing norms of the society, as insisted by the nine organisations which got this phrase inserted into the preamble 47 years ago. On the other hand, the protection of minorities is generally considered a crucial guarantee in modern constitutions, and the preamble contradicts, even if it does not actually undermine, the rights enshrined in Clause 4 (h) and (i) – freedom of conscience, and freedom of thought and expression. (The legal question, if it ever arose, would hinge on whether the rights take precedence over the preamble or vice-versa.)

America’s founding fathers faced this very issue when drawing up their constitution, with Thomas Jefferson being the most insistent that there should be “a wall of separation between Church and State.” In holding fast to this position, Jefferson and his colleagues were not necessarily reflecting common opinion. Indeed, his political opponents utilised accusations of atheism in order to demonise him, indicating that such an attack had a constituency. Nonetheless, the first amendment to the U.S. Constitution bans Congress from passing any law “respecting an establishment of religion”, or any which would “prohibit the free exercise” of religion. And, perhaps even more significantly, the U.S. Constitution states that “no religious Test shall ever be required as a qualification to any office or public Trust.” It must be noted, however, that in respect to this issue the founding fathers essentially failed: America has the highest proportion of believers of all developed nations, and atheists are considered by most Americans to be more unfit for public office than Muslims or homosexuals. But, in another sense, this proves Jefferson’s wisdom, for perhaps the constitutional guarantees have prevented religious conflicts that would have sundered the fledgling federation.

The inclusion of the supremacy of God phrase in our own Constitution creates a conflict for strictly ethical non-believers, for if such an individual is appointed to the Parliament they must swear to uphold the Constitution. Yet the oath itself acknowledges non-belief, since it allows the phrase “I affirm” rather than swearing on a holy book. Still, why should our Constitution create any conflict at all, especially when non-believers are likely to be more educated and ethical than born-again politicians?
at May 22, 2009 No comments:

The Association of Caribbean MediaWorkers (ACM) extends its greetings to media colleagues throughout the international community and the Caribbean on the occasion of World Press Freedom Day 2009.

This year’s observances meet our region in a state of crisis in several critical areas of public life. Growing violence and crime, economic instability, environmental threats and a decline in social and political cohesion have left the Caribbean open to questions regarding its continued viability as a region of relative peace and stability.

The search for solutions to the growing threats has led to important interventions at the level of integrating regional resources, negotiating and securing geo-political compacts, and actions at national levels to address issues of social injustice and economic imbalances. These have not been easy tasks to engage and our media have played a role in fostering greater public understanding of the nature of the challenges being confronted.

The ACM has consequently been engaged in collaborative attempts to instill greater awareness among journalists of critical areas of human development. We have collaborated on the development of a handbook on Climate Change for journalists, contributed to regional discussions on the United Nations Millennium Development Goals, human and humanitarian rights and, very soon, we plan to launch an Elections Handbook for Caribbean Journalists written and edited entirely by a team of Caribbean journalists.

The ACM also currently sits on the CARICOM Information, Communication and Technology Steering Committee where we have consistently argued in favour of an information and communication environment characterized by the right of citizens to communicate and to express themselves freely.

It is our view that free expression and greater access to information provide our citizens with important tools to make the critical decisions that shape their lives and the existence of their societies.

This is the philosophy we take to discussion tables throughout the Caribbean. It has informed our approach to proposed broadcasting legislation among countries of the Organisation of Eastern Caribbean States (OECS). It has brought us in conflict with the telecommunications authorities in Trinidad and Tobago where censorship is being viewed as an antidote for social decline. It is a view that has led to the concern that the banning of songs by official censors in Jamaica makes room for other forms of attack on free expression.

It is also this philosophy that guides our opposition to the continued radio broadcasting monopoly by the state in Guyana and has led to visits to several countries over recent years to discuss areas of conflict between journalists and the authorities.

United Nations Secretary-General, Ban Ki-Moon, has also noted the growing tendency to extend the hand of official sanction to the “new media” available via the Internet. This is an issue we continue to keep a close eye on, especially as regional regulators have left critical windows open for later intrusion into this area.

It is however also true that we have supported calls for the lifting of professional and ethical standards among Caribbean journalists and for the retooling of our newsrooms to guarantee better quality outputs. This provides the greatest assurance that consumers of media are provided with accurate, relevant and reliable news and information to employ in private and public decision-making. Media owners and managers must make the necessary investments to ensure this goal is achievable.

In pursuit of these ends, we have launched a Young Journalists Mentoring Programme which is an attempt to pair the new and young and bright with experienced, trained and competent journalists. This ambitious programme is challenged by territorial distance, a lack of finance and the fact of its own novelty, but during the course of the current year we propose to re-ignite the flame lit in 2008.

Our online and direct training programmes have over recent years spanned several countries and we are thankful for alliances with the United Nations Educational, Scientific and Cultural Organisation (UNESCO), the United Nations Information Centre for the Caribbean Area, the Knight Center for Journalism in the Americas, the Caribbean Institute for Media and Communication and the International Center for Journalists as these institutions continue to support our initiatives in the area of professional development.

Worldwide, journalists continue to be attacked, injured and killed in the line of duty. We do not routinely face these dangers. But we are always mindful of the growing potential for conflict, out of which can spring greater dangers for the journalists of our region. Our colleagues in Haiti continue to be challenged by such danger and Guyana has experienced its share of it.

Hopefully, we will be admitted to full membership of IFEX in June. This will provide us with important access to the resources of this global network, but it also places a greater obligation on us to monitor abuses of free expression and to report on them at the national level.

Finally, we are happy to report that the ACM has now established a permanent secretariat in Trinidad and Tobago. This has been a longstanding ambition of our organisation. It is our hope that this facility will assist us greatly as we move toward the professionalizing our work as a press freedom and media development institution in this part of the world.

Our national affiliates and focal points throughout the Caribbean have their work cut out for them this year and we offer them our unreserved support.