The Media and Elections in the Caribbean

It is now generally recognised that the mass media play an important role in ensuring that the conduct of elections and their outcomes are legitimised and enjoy broad public support. Poor media behaviour or deficient media outputs at election time almost always lead to disaffection and turmoil and questions regarding the validity of the process. A well-informed, vigilant media however ensure that high levels of transparency and accountability prevail.

Electoral systems in the English-speaking Caribbean have traditionally recognised the value of this phenomenon, setting both general and media-specific guidelines regarding the conduct of polls. It is important that the independent work of the media is recognised and that efforts are made to ensure that its outputs reflect reality. It is among the more important roles of electoral management boards to facilitate this process.

It is also the role of the state and the wider community to maintain conditions that facilitate the unfettered work of the press. Not only must there be access of the press to information on the progress of the electoral process, but there must be unhindered access by all political elements to the media, including the state media.

State-owned media too often operate along partisan lines, depriving opposition elements of access to both paid and earned media. Private media also correspondingly respond too frequently to the lure of advertising income and pay little attention to the equitable allocation of advertising time across the political spectrum. 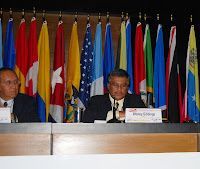 It is important that electoral boards encourage conditions that facilitate such access, however distant such an aspiration might be from the core mandates of such bodies. In Guyana, for the elections of 2006, the Elections Commission there successfully led the development of a Code of Conduct that pronounced strongly on the need for balance, fairness and equity in media coverage of the election.

The work of the mass media in covering elections in the English-speaking Caribbean has also over recent years taken on a level of importance that would position it as one of the more important features of the electoral process. Among other things, it is noteworthy that the liberalising of the broadcast media landscape over the past 20 years has followed closely on the heels of a wave of political change that placed longstanding opposition forces in power.

As we have noted in the ACM’s Elections Handbook for Caribbean Journalists, durable political organisations in Trinidad and Tobago, St Lucia, Guyana and The Bahamas were placed in unaccustomed positions as opposition parties during the period. The late Sir John Compton’s United Workers’ Party (UWP) of St Lucia had ruled for 14 consecutive years from 1982 to 1996. Eric Williams led People’s National Movement (PNM) administrations between 1956 and 1981 when he died; Guyana’s Forbes Burnham also died in office after serving as prime minister, then president of the country, between 1964 and 1985.

The late Sir Lynden Pindling of The Bahamas (Progressive Liberal Party) was prime minister for 23 consecutive years between 1969 and 1992; and the Antigua Labour Party ran Antigua and Barbuda for 28 years between 1976 and 2004.

Between 2006 and 2008 regime changes also occurred in Belize, Jamaica, Barbados, The Bahamas, and Grenada.

In almost all instances, broadcast media systems had moved from state monopolies to vastly expanded private media landscapes. In some cases, the liberalising of the broadcast media sector arose out of the view that the political parties that had now come to office had been victimised by restricted access to radio and television. Almost everywhere, the liberalising of the broadcast media occurred without regard for the important pre-requisites of an appropriate regulatory environment and an enlightened approach to the treatment of media content.

Today, the debate in Trinidad and Tobago, Guyana and Jamaica is the extent to which self-regulation is preferred over official regulation and censorship. In most other countries of the English-speaking Caribbean the question often arises, to a large degree, in the context of state dissatisfaction with media content.

An increasingly hard look is therefore being taken at media performance at important times, especially during the holding of elections. There has always been the perception of a somewhat linear impact between media content and the outcomes of elections. So, political parties and civil society have been paying keen attention to time and space allotted for both paid and earned coverage of political parties and their activities at election time.

In Guyana, for example, a Media Monitoring Unit was established in 2006 and was able to measure column inches and broadcast time while conducting qualitative research into media performance during the election held that year. It has been suggested that the relative peace of that election, following a tumultuous poll in 2001, was at least in part attributable to mass media behaviour during the period of campaigning, guided by the work of a Panel of Media Referees who administered a widely-supported Code of Media Conduct.

Clearly, the work of the media in election campaigns is as infuriatingly imperfect as it is absolutely necessary to ensure the success of such exercises. By the same token, we continue to be challenged by a pervasive official predisposition to consider the media to be a necessary evil at election time.

The truth is the media offer the best opportunity to portray the free and transparent nature of elections. If elections are considered to be free and transparent, and citizens have confidence in their execution, their results are, more or less, held to be representative of the will of the electorate. A government installed under such conditions will more likely than not enjoy the support and confidence needed to promote social cohesion and peace.

If, however, elections are not conducted in a manner that provides for the free exchange of ideas and solutions among candidates, their parties and the population; and if the process of voting and declaring results is not transparent, the outcome can and will impact negatively on the ability of the eventual victor to govern.

The common factor is all of this is an unfettered flow of information, analysis and opinion. Notwithstanding the logistical and regulatory imperatives, a successful election is one that is conducted in a transparent and open way, and brings an electorate to the ballot box with a proper grasp of the issues and proposed remedies that characterise the countries in which they live.

There must also be real choice among candidates and parties. They must be permitted to campaign openly and without hindrance and the rules of the game must be known and respected by all.

The practice of journalism has the potential to reinforce the pre-requisites of properly run elections. The basic journalistic tenets of accuracy, impartiality and sound judgment are important assets within the framework of democratic elections. Good election reporting, then, simply means good journalism.

Perhaps more than ever before, a spotlight of critical scrutiny is falling upon journalists covering elections. Changes in the social, cultural and political environment in the Caribbean have brought into sharper focus the media’s role in the reporting of election campaigns. For election campaigns themselves have been gaining a new and even dramatic historical significance.

Thankfully, election results in the English-speaking Caribbean have generally been widely accepted. There have, of course been the exceptions. Doubts and partisan claims regarding the integrity of the electoral process have led to post-election disturbances in Grenada, Guyana and St Kitts and Nevis. Unstable political conditions also followed the 18-18 election deadlock in Trinidad and Tobago in 2001.

Journalists typically consider the relationship they develop with electoral management boards to be almost as valuable as the connections they establish with contesting parties. Though the activities of the political parties constitute the backbone of electoral coverage, dispatches from electoral boards in the Caribbean are generally accepted as authoritative and credible and are used in a routine manner.

It is perhaps a shortcoming of journalists that a greater degree of scrutiny is not usually applied to information generated by these bodies. It is also not generally recognised that the responsibilities of electoral boards are capable of generating far more critical information on the conduct of elections than is otherwise recognised.

The range of story possibilities includes functions such as:

It is probably true to say that the work programmes of electoral boards constitute a blueprint for the news agenda for elections. Most of the news and information generated for an election are associated with the processes that apply between the setting of boundaries and the final count and declaration. The boards as the implementing agency for these processes are the single most important sources of credible information. If an electoral board is considered to be compromised in any way, the entire elections process loses credibility and the support of the press.

In most instances, electoral boards employ media liaisons to maintain contact with the press. This is a most important function that is ignored at the peril of the relevant body. The role of these professionals should be considered to be facilitative and not obstructive. Too often, media liaisons attached to quasi-state institutions, consider their role to be to ensure there is arms-length exposure to the press. It is important that transparency is maintained throughout all processes associated with the work of the board.

Over recent years, regional and international observer missions have become rather standard players in elections throughout the English-speaking Caribbean. They have added a new dimension to coverage of elections. In addition to electoral boards, these missions in most instances are sources of information on the voting process.

The presence of high-profile international personalities, chosen because of their expertise, knowledge and independence, also provides an opportunity to enhance the credibility of boards by providing a presumably independent source of information validation.

The mandates of observer missions also provide a cue to journalists on areas of attention and possible coverage. Though some areas appear routine, they play an important part in the smooth and efficient conduct of elections. They include:

A debate exists whether public opinion polls play a role in determining the outcomes of elections. The media now routinely include publication of survey results as part of their election coverage. It is important that media houses apply more rigorous standards when it comes to their acceptance of survey results and their eventual decision to publish such surveys.

In many instances, as well, newspapers commission their own surveys. It would be important to accompany these surveys with a level of public awareness and education on the value of such exercises so that media audiences are in a position to make their own assessment of their acceptability.

The value of media monitoring and refereeing cannot be underestimated. This ensures that media coverage plays a role in validating electoral processes and outcomes and uncovering transgressions when they occur.

The Guyana experiment of 2006 provides us with a model that has the potential to improve relations between electoral boards and the media, heighten public awareness of the work required to execute and election and produce more acceptable levels of media performance at election time.
at September 29, 2009